The Dive Sites of Anguilla

Here are some of the more noteworthy dive sites for Anguilla for you to explore when you get there.

Here is a great article on diving in Anguilla which you should read - click here.

This reef is what we consider the safest dive site in Anguilla. The boat is anchored on a Sandy bottom in 7 to 8 feet of water. It is protected by three reef structures which means that is always calm with very little water movement.

However once you hit the start of the reef in 15 feet of water you are surrounded by all types of soft coral and a forest of sea fans; max depth is 40 feet. This dive is great for snorkelers and novice divers alike and offers a great chance of seeing Southern Stingrays, Eagle Rays and Turtles.

At this reef, the boat is anchored in 10 to 15 feet of water and you swim along the edge of the reef structure that will take you down as deep as 60 feet at which point the reef curves to your left/west and heads another 60 feet. We see Tarpon, Southern Stingrays and Atlantic Spadefish on this dive.

What a great dive this is! One of our personal staff favorites for both snorkeling and diving, its name is due to the large number of Angel fish seen at this dive site. This site has 10-12 feet high sea whip and huge sea fans. We anchor in 22 feet of water at the edge of the reef which goes anywhere from 1ft to 65 ft deep. Lots of Stingrays and Turtles also seen here.

This reef takes its name from the Caribbean lobster that can be found moving about over this hard coral reef. Most reef sites in Anguilla are made up of Soft coral however this is a huge horseshoe shaped plateau that starts in 25ft and goes to a drop off at 45 ft, from there we hit a sandy bottom in 85-100 ft of water. On the edge of the drop-off we are able to see Nurse Sharks under the ledgers.

This reef is famous on Anguilla for offering great snorkeling. Its reputation in not unfounded. The plateau is in 15 to 18ft of water and goes down towards a 45 degree drop-off at 25ft after that point it drops off anywhere from 30 feet at its Eastern end to 85 ft on its Western end. At the base of the reef is a sandy bottom where we often see Southern String Rays, Lobster, Crayfish and Eels in the overhangs and holes within the reef itself.

A dive favorite for those who like to see eels, arrow crabs, cleaner shrimp, red claw shrimp and lobster. This site offers good safe diving with only a short boat ride. We anchor in 15-20 ft of water on the top on the reef where large Elkhorn coral formations can be found; these are seen on the edge of the drop-off at 25 ft where it drops off to an 80ft sandy bottom. 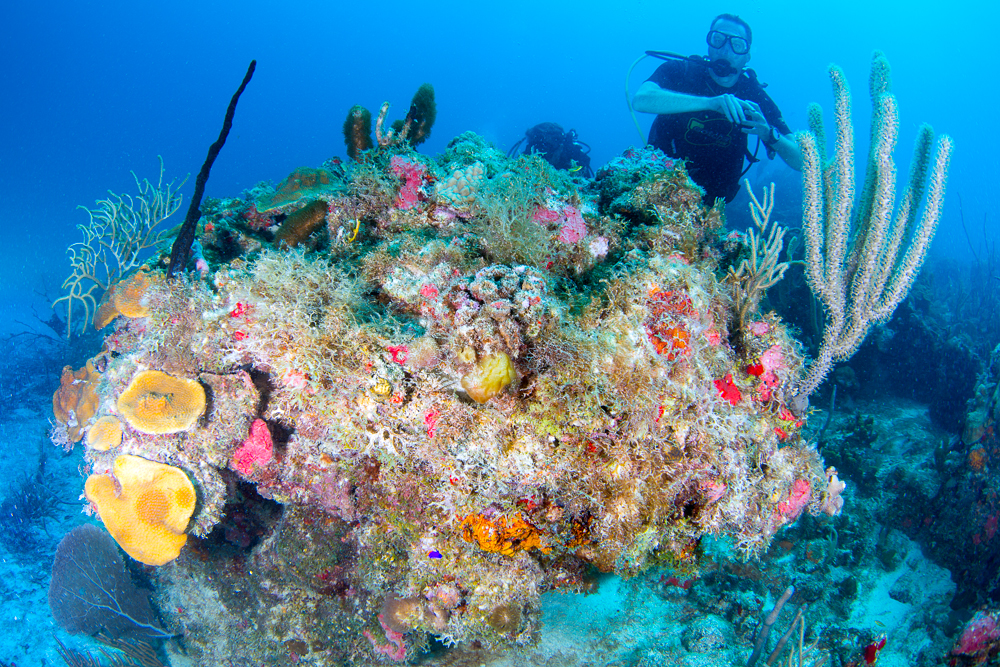 We named this reef after Michel, simply because he was French and it sounded better than Michel. That said it is an interesting reef with a large flat area at 8 to 30ft with a steep drop-off to 83ft where the reef then goes out flat to about 100ft. Most of our dive sites have sandy bottoms but this site has coral heads and sandy circles that are great for Southern stingrays and Lobster that are quite often caught in the open running between holes.

This site it situated with steep cliffs and caves as a backdrop to the reef site. The caves only go back about twenty feet so they are not diveable. What we have here though is a very wide plateau at about 22 feet; it has trenches that run at 90 degrees to the shoreline until they meet the drop-off about twenty feet apart. You can follow these to the drop-off and slide down the reef to about 70 ft. The trenches are the perfect place for searching for those critters that love to hide.

This site was named 'Captain Turtle' for two reasons. The first reason being that we often see turtles here. The second reason in that the owner of Le-Bar the restaurant behind our shop loves to dive this site and people sometimes call him Captain Turtle because of his love of the sea. If you get a chance ask him about the medallions that where on his bar at Sandy Ground! This is one of the writer's favorite dives. The plateau has lots of places for Nurse Sharks to sleep so we always look for them when we are there. Soft coral fans lead the way to the drop-off. This dive can range anywhere from 20ft to 65ft. A nice easy dive that entertains the novice to the most experience diver.

One of Anguilla's few dives that can be done as a shore dive; this reef is one of the last shoreline reefs sites before the limestone cliffs that line our shores. This site ranges in depth from 15ft to 60 ft. Lots of southern stingrays can be found on the sandy bottoms.

Not really a dive site due to its shallow depth of 20ft maximum but worth a mention as a great place to snorkel. This area is very calm and protected from the winter storms. Even the most novice snorkelers can have a great time here. There are lots of small fish and lobsters here as the site is a nursery area for young fish. 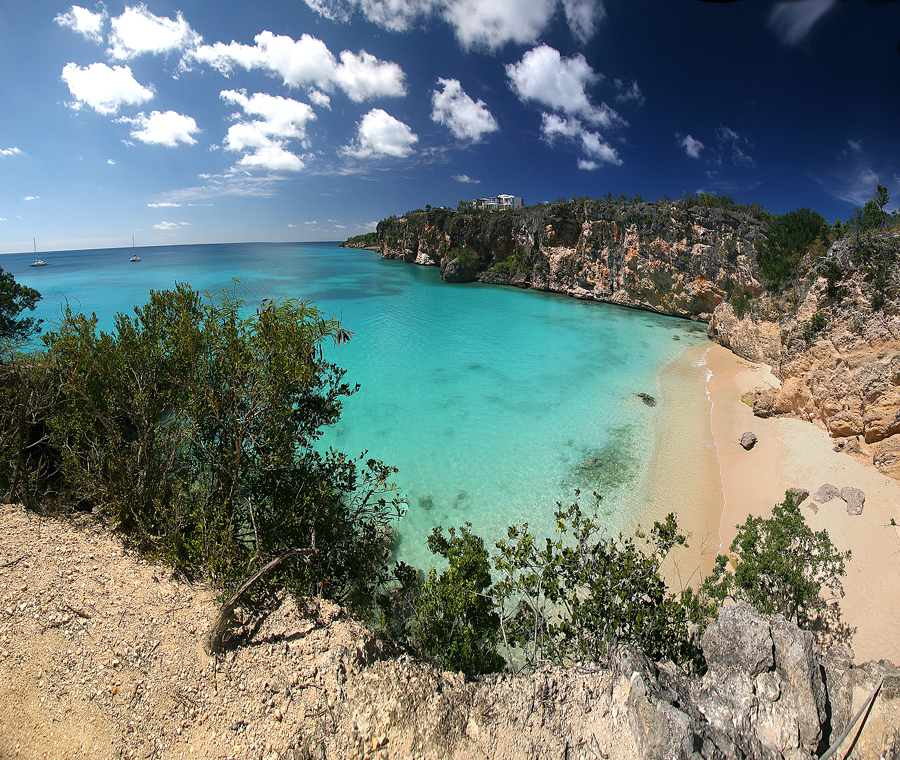 This is Anguilla's only steel freighter wrecks sites that was not sunk on purpose. It was in the process of being cleaned up when a fire on board got out of control and was left to burn its self out. However over night the wreck sunk in the sandy area outside of Road Bay and only the top of the mast could be seen. The mast this was cut off at 30ft so that it would not be a navigation hazard and it became a dive site. Even though there is no reef around it has still become a great attraction for the fish. The wreck sits intact and upright on the bottom and ranges in depth from 30 to 60 feet.

This wreck sits in 82ft of water by the stern. It is intact and upright but has received damage due to storms that have passed though over the last six years, however rather that detracting from the dive site it has added a strange eerie feel to this wreck. Some of the biggest lobsters to be found can be seen here with the largest lobster ranging anywhere from 20 to 30 pounds depending on who is telling the fisherman's tale. This wreck is located on a reef and has introduced the larger fish to this area. We often see hog fish, atlantic spadefish, goat fish, lobster and barracuda at 15 to 20 feet on the mooring line.

One of three of Sandy Island's dive sites. It is at the Southern edge of the horseshoe shaped plateau that surrounds Sandy Island. It goes from 15 to 60 feet at the edge. It offers a wide range of fish life as is a fun easy dive.

This site is in fact the deepest at 70 feet (who said names had to be true to the site?). It is very similar to Sandy Deep and offers the same types of coral and fish. We are more likely to see stingrays here and slightly harder coral heads.

The third and the best of Sandy Island's dive sites. It got its name because we where fed up of Sandy 'this' and Sandy 'that' so we never gave it a name and people started to call it 'No Name' and it stuck. That aside, it's a very pretty soft coral reef that is anywhere from 20-65 feet.

The most damaged of the wrecks it sits on the northwest side of Sandy Island. It is located on the reef in 60 ft of water and has had the bow twisted on its side from a storm. Both the wreck and reef offer a long bottom time at only 60 ft. There is a car, well what is left of it off to the right if you are facing the bow.

This is a well preserved wreck that has a max depth of 80ft. The bow faces into Sandy ground and has the remains of a VW car off to its stern. We see garden eels, southern stingrays and a very playful turtle on this wreck.

This flat reef is situated across from the Osterdeep wreck. It is a large flat reef that is at a depth of 60-80 ft. We find both soft and hard coral here. Southern stringrays are caught feeding on the sandy bottom at the edge of this reef.

By far the biggest of the wrecks, it sits out toward the 12 miles of reef that runs between Prickly Pear and Island Harbour. Like most of the wrecks, she was sunk intact and upright in the water. The cargo areas and the hull sit in 80ft of water but the top of the wheel house is only 30ft. There was a large Jew Fish in residence but it has not been seen in a while. The sheer size of this wreck makes it a worthwhile dive.

At the edge of limestone cliffs sits this shallow reef. The ledge that can be found at 30ft is a good site for Nurse Sharks to sleep and Lobsters to hide. An easy and fun shallow dive that runs parallel to shore.

This is thought of by most divers in Anguilla to be the second best reef dive. However due to its location, rough seas make it a dive that is conducted only when conditions allow. We have dived at three different places along this sheer 90ft wall dive. Due to currents, this is always a drift dive but it is home to, Black tip reef sharks, Tiger sharks. Lemon sharks and Nurse Sharks. The wall that is at the edge of some very deep water brings Tuna, Tarpon, Yellow tail snapper and grunts abound.

Anguilla's number one dive. This dive is located at Little Scrub on the eastern end on Anguilla. It starts at 40 ft and takes you down to 90 ft through a system of ledgers that form steps. You see all types of sharks and big fish around. However that is not all that this site offers, you can swim under and between huge boulders, which line the site, that have been washed off the island during storms.