A Coming Together – Antigua Carnival

Family fun and friends reunite at the carnival all around. You could see and feel it. I guess Antigua is not that big that everyone is a stranger? But at carnival time everyone gets pulled together around St Johns the Capital. So what is the carnival about? 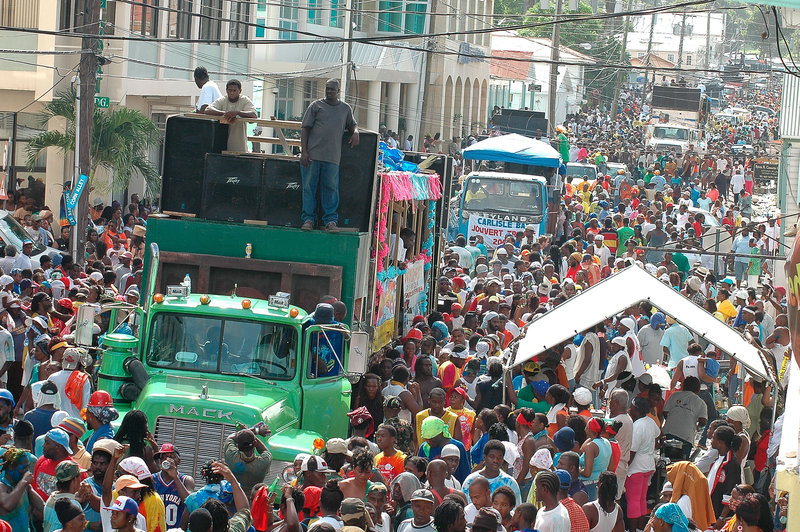 The Antigua carnival might be best explained as a street party combined with the use of the old cricket stadium. Floats and groups of teams called Troupes parade behind and sometimes in front of their float and they are competing on many levels. At the end of the week long festival awards are presented on closing day best dressed best performances etc. The floats and troupes parade on opening day and again on closing day. There is also a kids day where the troupes are just children. So in between over the week the action is pretty much just in the evening in the cricket ground at the head of the city. And each year the plan is a little different though always there will be a Queen of Carnival. This year the award went to Raynell Carroll on Monday evening and she also walked away with the swim suit round win too.

Troupes and floats are organized at various points around the city and converge into a common route that ends in the Antigua Recreation Ground (old cricket ground). There are many stalls to buy food and refreshment from, the members of the troupe are kept topped up by the floats and supporting team members. To get a float together takes a lot of work and the returns are sponsorship deals and great feelings and memories.

I think the opening ceremony had the greatest energy with a full week to come it was an amazing day ! We left on a bit of an unofficial tour with our guide who is really passionate about carnival Dalston from our resort in Dickenson Bay by taxi. Of course a lot of the roads have been closed off for the passing parade so you get to go somewhat close and then walk in. We were not far off the action and arrived at a good time – 2.00pm. We targeted various spots along High Street where the parade passed in this wider street. Firstly we had been given a quick tour of the ARG where we would end the evening. You are advised that shade may be hard to come by but even if you do get in the shade the temperatures can get very high. Water is easily available but don’t forget to drink it ! I helped Dalston get some drinks in as we arrived in our spot and we settled in. But already carnival fever was in my blood and I was moving my body badly to the rhythms of the Caribbean and having a great time. The volume from the floats can be very invigorating let’s not describe it as deafening as the speakers pass by.
Floats could be divided into different kinds

Classical Ones; with the troupe dancing behind or in front of a float. The better in formation with amazing costumes.

Steel Bands; sometimes with dancers sometimes not. Tractors often pulled specially constructed platforms – see the trailers bounce with the beat. Now I was waiting for the harmonious motion to destroy one ! They know what they are doing right ?

Single costumed people without a supporting float, E.T. and a shark were seen at the 2013 Antigua Carnival.

There were a couple of the Carnival Queen contestants in stylish or original cars and one driver invited me to sit on the side with her; there is a digital photo out there !

The group wandered up as the last float passed and we followed behind. Let me say it is lovely that there are no stupid rules and not too many controls that are not needed. So you are free to be sensible and walk between the floats and cross the road for a drink or get rid of rubbish for example. It was also great because the crowds were really manageable and there was a great mix of space without loss of ambiance. We entered again the ARG and settled into an upper stand seat – ALL FREE ! Another greatness of the Antigua Carnival. A stage was set up in the middle of the oval shaped field that would house the weeks evening events. It was a little hard to hear clearly the announcer but you got the gist of what was coming on the stage. A few of us decided to go down onto the field closer to the stage. There were rides for those younger than me mostly for kids and again places to buy food and drink. We wound down from the excitement of the street and eventually had to give in and head back to our minibus. It’s a great way to do the Antigua Carnival with an organized tour guide.

I was unable to attend the weeks evenings between but I did get back to St Johns in the day and the stalls were still there the Antiguan people still enjoying Carnival.

One of the more interesting parts is J'ouvert or a play on ‘jour ouvert’ day opening literally. This year it started at 4am and finished at 11 am, almost a late late night out steel bands and more modern music.

I also attended the closing ceremony with my friend John and we walked between the troupes (against the flow) which is the way I like it you get a really different ‘feel’ and see the floats faster and burn off some of the rum ! In fact earlier in the day it’s a great way to get some pics in St Johns as the streets are free of cars – one of the few times J

I saw different troupes and some of the same as on opening day but the energy was still there. I was so glad that I was able to do the Carnival AGAIN ! get those same feelings and vibes and dance again badly.

Speakers piled so high people needed to be on top lifting the power and telephone lines as the floats passed. A few key songs were playing. You can get the vibe again here.

Carnival all started in 1834 when slavery was abolished and unsurprisingly the people took to the streets.

Smiling faces and bodies of all shapes crammed into lycra – excellent dancing – sun and family fun. Do not miss Antigua Carnival if you are here !