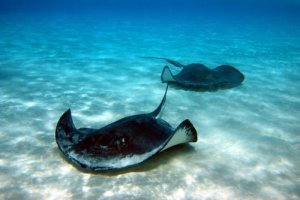 Hi. I'm Captain Mark and I am the owner /operator of Absolute Divers Ltd.

I have been diving for over 25 years. I learned to dive in the 32F waters of the bay of Fundy NS. but now I am a little spoiled after nearly 10,000 dives in the 84F waters of Grand Cayman .

I became a dive instructor when I moved to Grand Cayman in 1996. I hold an RYA. 200-ton offshore Yachtmaster license for which I trained in Southampton, UK. (Don't let the fact that the Titanic sailed from there bother you). I was  born and raised in Canada, and served in the Canadian Armed Forces as a medic for eight years, the last four of which in Lahr Germany.

After working for years on the "cattle boats" here in Cayman, I just didn’t think diving with 30 of your new best friends was much fun, so about 7 years ago I started  Absolute Divers with the idea of offering a personalized diving/snorkelling charters to small groups and families.