Barracudas are fearless marine fish swimming in the world's tropical and subtropical oceans. They are known for their fierceness and 'ambush' hunting - they lie in wait and catch the prey by surprise.There are approximately 25 species of Barracuda. The best known is the great barracuda, which are usually hunted for game. Great barracuda can grow up to 1.8 m (6 ft) long and swims in the Atlantic from Florida to Brazil.The northern sennet, another type of barracuda, is 46 cm (18 in) long and can be found from Bermuda to the Gulf of Mexico. The European barracuda and some others are known to attack humans for no apparent reason; however this is very rare. 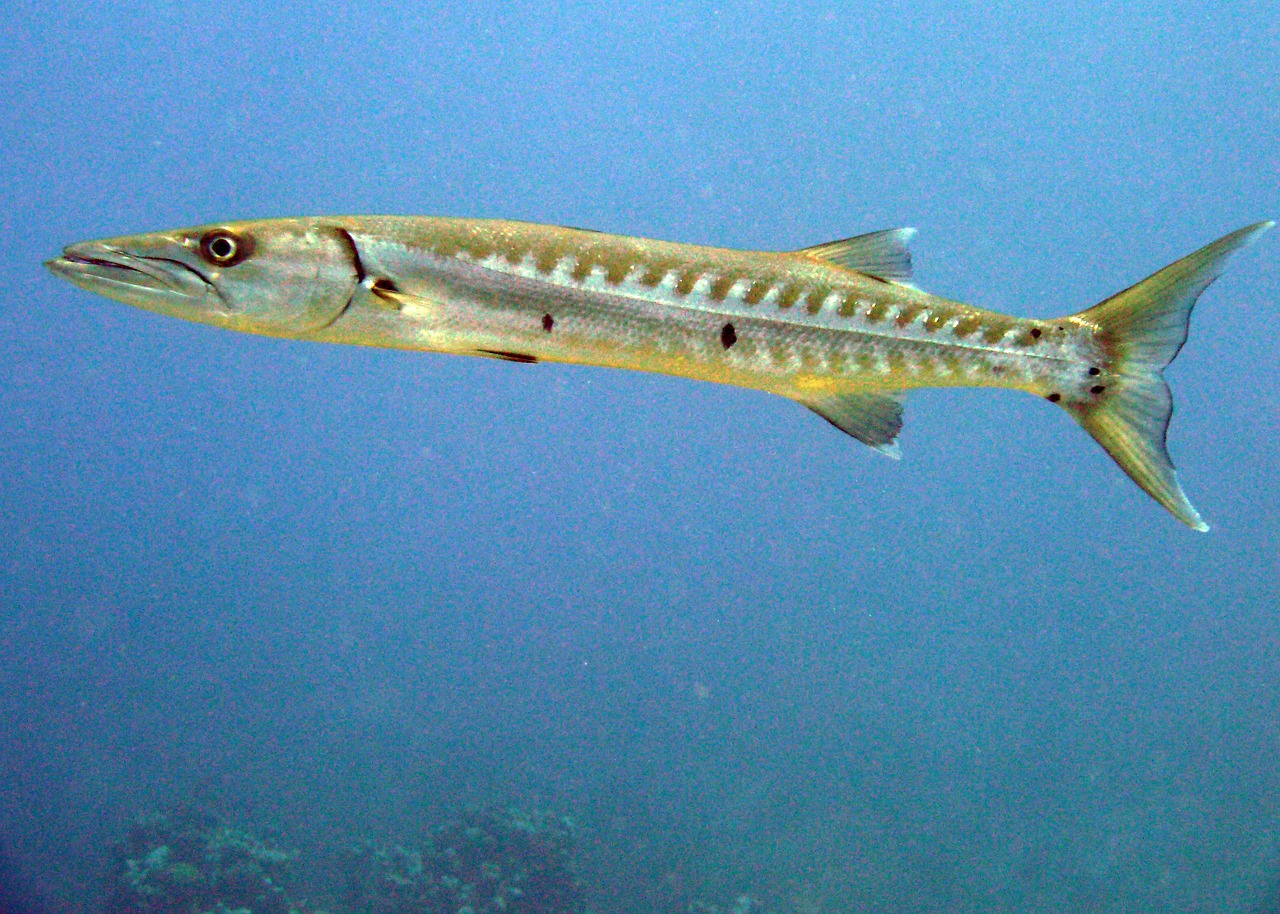 Barracudas are hunted as game and for food; the Pacific Barracuda and the California barracuda, which spends the winter off the shore of Mexico, are good food sources.

Large barracudas will often travel alone while the smaller ones will travel in schools of even thousands of fish. But ciguatera is a common risk in the Caribbean butthere are tests - ants are said to not eat a bad fish. Read on for more later.

Physical description
Barracudas have long, thin bodies whose color fades from dark on top to a very pale shade on bottom. They have a large mouth, with teeth looking like tiny daggers jutting out from the lower jaw, giving it the nickname "tiger of the sea". Barracudas have two separate dorsal fins with a forked tail fin. They have no eyelids and are slow-moving when asleep.

Ciguatera poisoning
Barracudas caught in the tropical waters may be poisonous and can cause a type of food poisoning in humans called "Ciguatera". This happens because barracuda feeds on fish that in turn feed on algae containing the toxin ciguatoxin (particularly, the micro-algae Gambierdiscus toxicus). The giant barracuda, the Indo-Malaysian barracuda and the great barracuda are the ones who are likely to be toxic.

Eating habits
The barracuda moves quickly through coral reefs in search of food. It has a huge appetite and uses its acute eyesight to hunt. A barracuda can be lazily drifting and suddenly shoot out to catch the next meal at speeds of up to 25 miles per hour. Mullets, anchovies, and grunts, groupers, snapper, bream and even young barracudas are some of the small fish the barracudas eat. Barracudas will sometimes hunt in a group by herding small fish into shallow water. They will strike anything that moves.

Mating and lifespan
Barracudas move to warmer waters to mate in April and the young feed on plankton. Great barracudas' spawning habits have never been recorded but it is known that they don't nurture their young. They mature in about 2 years. So far no one has been able to tell the male from the female. I find that fact astonishing !

You can measure a barracuda's age by counting the rings on its scales or in a tiny structure called an otolith in its ear. For each year of its life, a fish has one new ring, and it can live up to fourteen years.

Interesting tidbits
In 1992, at Christmas Island, Republic of Kiribati, the world record weight of a captured barracuda was 85 lbs.