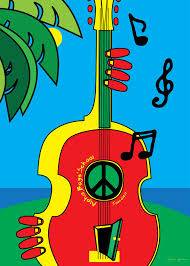 “One love, one heart, let’s get together and feel alright…let’s get together and feel alright” An excerpt from the legendary- Robert Nesta Marley (Bob Marley). Dating back far in history, Jamaica has many genre of music and have seen many artist come and go who have made their mark, promote the growth of the music and help to build the country. Jamaican music from earlier times was mainly based on life issues and experiences and as much, it carried a lot of emotional and touchy feelings that both singers and listeners could relate to personally. Because of its content and the beat that is associated with it, persons from all over the world are easily captivated by it and become really addicted. Reggae is a renowned worldwide feature that has the ability to pull so many people from all walks of life. It is a genuinely natural heartbeat pump that somehow knows how to pull persons towards it. It also has such positive impact on everyone who has come in contact with it that a whole month here in Jamaica has being dedicated and deemed “reggae month”-February. It is also a representational and significant month too as the legend Bob Marley was born this month. Reggae is a core Jamaican music wrapped around the likes of Ska (a fast popular music originating in Jamaica around the 1960s) and Mento (a beat of folk rhythm originating from a dance style) as overtime stretched its banks and has also influenced other forms of music. A few foundation reggae artists are persons like the late Bob Marley, Bob Andy, Buju Banton, Ken Boothe, Etana, Queen Ifrica, Taurus Riley, Jimmy Riley, and Morgan’s Heritage among so many others. They have songs which based on the lyrics and contents are related naturally to everyday living and lifestyle.

This foundation music has also influenced the beats of another world renowned music Genre, Gospel. This is music which has its contents centered on Christ Jesus and many artist have linked their way of producing this music kind like that of reggae-heartfelt and lifestyle linked. Also, reggae has become so strong overtime that the birth of another popular music genre now hitting the world was developed from it. Many persons here in Jamaica and around the world have gravitated to the hit dancehall music. This is a form of reggae but not with the same root digging lyrics as it differs mainly in:

There will never be another music genre as wide as reggae but here in Jamaica, dancehall music has a wide audience of especially the younger generation as most of the artists are sometimes of the same age group as the listeners. They somehow develop the stance of starting their musical journey while still in school or just after leaving. A foundation artist in the aiding and development of dancehall was Yellowman. He helped to build the genre of music that as overtime developed itself in bringing the birth of a new generation of music sensations, producers and more artists. It has somehow changed as time went by into incorporating more musical producing units other than the traditional and customary instruments used in the royal beats of historic reggae. This to some extent showed development in music and that is a plus advantage for the country.

But since the development of dancehall music over 40 years now, it has many ups and downs and have many progress by far in the positive side and that is certainly a good attribute everyone would look for to helping to build Jamaica. They definitely know how to produce only the best that the world is looking for and when Jamaica does its job, a world class presentation. Its popularity is an ever growing trend here in Jamaica and as it spread its wings across the globe, once again, there will be a soul touching type of music that the world may want to see.

Kingston, Jamaica
Food and Drink in The British Virgin Islands
Vacation Activities To Do In Jamaica